From the 4th  to the 6th of April the European project PrimeFish, funded by the Horizon 2020 programme of the European Commission has presented its first results on the consumption of seafood in Europe.

PrimeFish is developing a web-based tool to strengthen the competitiveness of the European fisheries and aquaculture sector through several ways, being some of them the analysis of the innovation in the seafood market, the analysis of the consumption and the barriers and drivers that lead consumers to the fish counters. The project began in 2015 and will finish in 2019.

Guðmundur Stefánsson, project coordinator, outlined the aim of the meeting: “The focus is on the commercial aspect of the project together with the possible improvements and the general good for society”. The 16 research centers, universities and SMEs working together in PrimeFish hold an annual meeting to help the researchers to coordinate their work and foresee the next steps to take.

On the 6th April and under the motto of “Science-based Competitiveness and Policy Making for the European Seafood Sector”, PrimeFish researchers introduced the first results of the project in front of 60 attendants, among them representatives of the Directorate General for  Maritime Affairs and Fisheries of the European Commission (DG Mare), Aurora de Blas (Spanish General Secretary of Fisheries), Grimur Valdimarsson (Senior Advisor from the Ministry of Industries and Innovation of Iceland), Ross Butler (CEO of Cooke Seafood USA), Haukur Þór Hauksson (Deputy manager of Fisheries Iceland-SFS), Mike Park (Chief Executive of the Scottish White Fish Producers Association), Jóhannes Pálsson (CEO of FF Skagen), Javier Ojeda (Manager of the APROMAR) and Sveinn Margeirsson (CEO of Matís). Other representatives from the fisheries and aquaculture sectors of Denmark, Italy, France, Germany, Greece and United Kingdom also participated in the meeting.

Together with the work done so far, the project coordinator Guðmundur Stefánsson awarded the winning team of the “Promoting Seafood Consumption” video competition in Vilanova I la Geltrú. A team joining the 3 audio-visual Spanish students David Redondo, Yomar Sardón and Anatoly Komendrovskiy won the contest with a film outlining the characteristics of seafood and the benefits of carrying a healthy and active life.

Participation of PrimeFish in the EAFE conference

PrimeFish endeavors regarding the drivers and barriers for seafood consumption and the analysis of the French consumption will be presented in the XXIII Conference of the European Association of Fisheries Economists (EAFE) which will be held at the Dublin Castle from the 25th to the 27th April 2017. On the 25th of April, Arnar Buason will present his work related to the French consumers under the title “Fond of Fish? A Count Data Analysis of How Frequently French Consumers Purchase Seafood” on the session entitled “Markets and Marketing of Fish Products”, while on the 26th of April, Kolbrún Sveinsdottir will introduce the public to the “Motives and Barriers for Seafood Consumption: Consumer Perception in Five European Countries” in the session number 13.

The PrimeFish project will also organize a special session during the World Seafood Conference in Reykjavik on the 12th of September. The topic addressed will be the Competitiveness & Economic Sustainability in the European seafood sectors, paying attention to the supply chain relations and the improvement of the sectorial strategic plans.

The project is developing a web-based tool that will function as a container for the outcomes of the project, among them, the following studies.

The general patterns of the seafood market and price behavior have been analysed with an advanced econometric models such as demand system models and discrete choice demand models in order to investigate the market mechanism and the evolution of the price cycles of fish. These cycles are called boom (when they grow up) and bust (vice versa) and they are able to impact directly on the firms’ competitiveness. The main outcome discovered is related to the price transmission and market integration among cod, herring, seabass, seabream, trout and salmon in markets and along the value chains. Now the macro-economic factors, such as household income, market prices, production volume, tariff and non-tariff barriers and exchange rates, are being analysed in order to be more accurate with the forthcoming price predictions that will be performed and offer to the final user through the Prime Decision Support System (PrimeDSS).

PrimeFish looks also for analyzing the likelihood of success for new seafood products. Building on European consumer studies and previous scientific literature, a survey has been designed to gather the consumers’ views across Italy, Spain, United Kingdom, Germany and France. Then, a model developed in PrimeFish will match consumer segments with the firms’ new product, predicting the best segment and product fit, so that companies will be able to implement more accurate and cost-efficient marketing practices.

Drivers and barriers for seafood consumption

Among its first results, PrimeFish has finished a qualitative study focused on the drivers and barriers for the consumption of salmon, trout, seabass, seabream, herring and cod in some of the most important European markets (France, Germany, Italy, Spain, United Kingdom). The endeavor concluded that seafood maintains a general positive image because of its nutrient content, being considered as a light food and having a healthy image. Nonetheless, price, bones and the lack of skills to cook seafood remain as the main barriers for its consumption. Many interviewees cited origin and the negative press on farmed fish as their major concerns. Heavy and light fish consumers were included in the 90 interviews that were realized.

Spanish and Italian consumers prefer fresh fish, with origin being one of their main concerns and sellers playing a major role in the purchasing decision. In Germany, consumers outline origin, but also sustainability, traceability and organic production as being of high importance when choosing seafood products. British consumers choose chilled and ready to eat or ready to heat products, with certifications being important. However, origin is not an important element in its market. French consumers opt for fresh fish but canned, smoked or frozen products are bought when there is a lack of knowledge or experience in buying fresh fish.

Innovations in the seafood sector: cod and salmon

Another of the fields of work of PrimeFish is the analysis of the innovations in the seafood sector. From 2000 to 2015 22,406 seafood products were launched in the European market according to Mintel’s Global New Products Database. Most of them could be categorised as new varieties (44.16%), new products (38.64%) new packaging (11.72%) new formulations (2.99%) and product relaunches (2.49%). Regarding the origin, France, United Kingdom, Spain and Germany represent 54% of innovations. Salmon, crustaceans and tuna are present in the majority of the innovative recipes.

The analysis of the innovations in seafood products in Europe showed the need for a purposeful and goal-oriented approach for innovation where the new seafood product “fits” the target consumer. For instance, there are few innovative products in Europe containing trout or seabass. Cod is the raw material for many innovations, with a lot of them being frozen. Another main species for innovation is salmon. Sustainable products with herring are growing at a fast pace in Germany and East European countries. Among the species selected by  the project, pangasius is not yet a common fish in Europe for innovative products.

Strategies to address innovation do not differ among big and small companies, with both triggering innovation in response to internal endeavors and consumer research. Bigger companies tend to pass a clear message focused on convenience and health. Smaller firms try to occupy the niche market by targeting narrower consumer groups with very specific preferences. The process varies on the scale of the companies, as smaller seafood companies approach innovation through “trial and error”, whereas larger firms count on their own R&D departments.

Analysis of demand in France and Finland

Two countries with high levels of seafood consumption, France and Finland, were the subject of a deep analysis on the seafood demand outlining drivers for consumption linked to the social or economic characteristics of consumers and the competition between different products. In France, for instance, there are more possibilities of consuming cod or seabass as the consumers increase their expenditure. In Finland, the same scenario would increase the options to choose trout. Salmon represents a particular case in France, as its demand varies on its own price, but affects the demand for other species (e.g. trout or herring).

The study realised by PrimeFish researchers demonstrated that the main competition often occurs within a market segment (e.g. smoked salmon and smoked trout in France), but substitutions may occur broadly, as canned tuna is a major substitute for salmon, trout, seabass, seabream, cod and herring in the French market. The analysis also showed a high degree of heterogeneity among consumers and their sociodemographic characteristic, which suggests the need for the sector to segment the market and target marketing strategies.

An analysis of seafood consumption: France

The analysis of purchase frequencies of seafood in France realized by PrimeFish outlined the link between some products and their target consumers. The typical French fresh salmon buyer is a healthy upper-class individual with university education living in the Paris area or the North of France. Frozen salmonids (trout, salmon) attract younger consumers with university education from the East, South and Paris area. Fresh cod consumers are seniors, living in small households who do not own their own housing.

Next year the PrimeFish consortium will focus its efforts on the investigation of institutional analysis, sectoral dynamics, the benefits of increased fish consumption on the health of consumers, non-market effects of aquaculture and captured fisheries, consumers’ willingness to pay for seafood products and the realm of social awareness regarding seafood consumption.

- Welcome and introduction to the PrimeFish project.

- The Economic Performance of Fisheries and Aquaculture.

- A Decision Support Framework on Ecosystem-based Management, the MareFrame project.

Christian Olesen, chairman of the Board of DPPO.

- Success (and failure) story on seabass and seabream: APROMAR (Spain).

- DG Mare and the European Market Observatory for Fisheries and Aquaculture.

- The Perspective of a National Administration: the Case of Seafood Consumption and Labelling in Spain.

- The Canadian case: Expanding the Boundaries of Research.

- Strengthening the Competitiveness Through the Blue Growth Strategy. 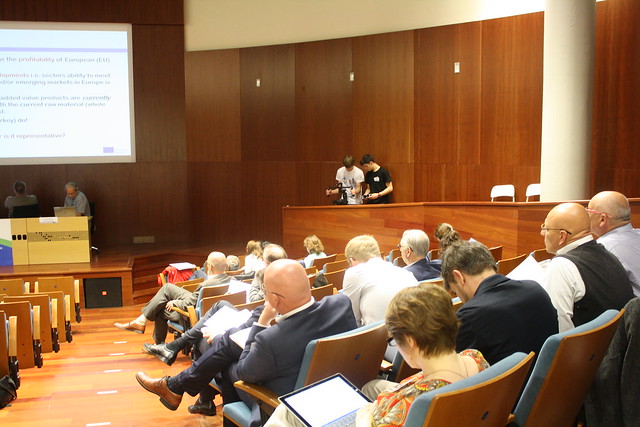